Running a poetry workshop about the Menopause

My poem 'The Change' appeared on a postcard for the Off the Rails project and was spotted by a writing friend who was involved in running a series of lectures about the Menopause at the University of Essex.  It was a pilot event to enable discussion about a difficult subject. I was asked to lead a creative workshop.
My original poem was in response to a portrait by Robert Wiseman and a theme of 'Change.'. 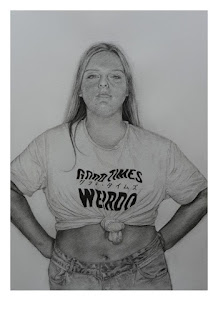 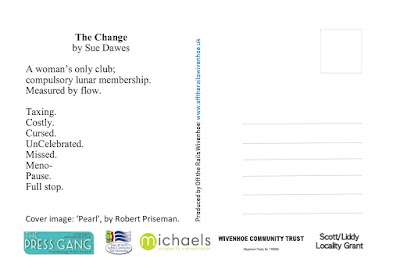 It's difficult to create a workshop when you have no idea of numbers or whether your audience has any experience of creative writing or in fact, the confidence to take part.  I decided to keep it simple and to base it on the 'symptoms' of menopause.

I also decided to use Acrostic poetry as a way to help people to express the feelings associated with the Menopause but also not to have to worry about rhythm and style (impossible in half an hour!). 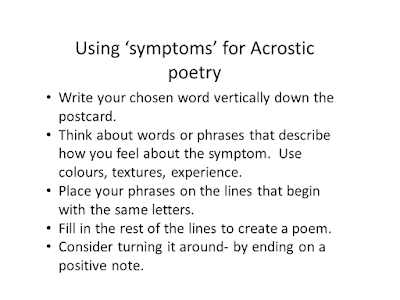 I then wrote my own example, keeping in mind that anything too laboured over, tends to put novices off.   I wanted the workshop to create discussion without any awkwardness. 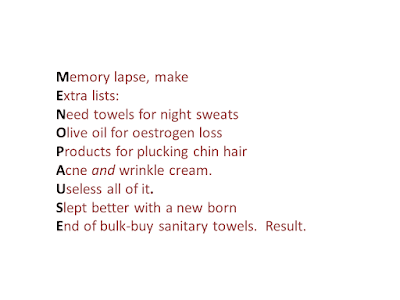 There were some great poems created during the session.  Some of the writers used their own words like 'Power', and others used a symptom and twisted it on its head. The one conclusion from the day was that we don't talk enough about the Menopause, despite the fact that more than half of the population have to deal with it, especially in the workplace where symptoms can be debilitating.
Menopause is change and it can be a change for the better.