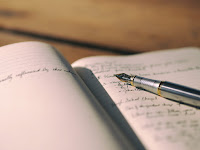 Eight months on from NaNoWriMo, and I’m proud to report I wrote every day, and I completed a novel. An un-edited, first-draft mess of a novel, but I did it. More of that later…
At the time, I stated my main intention was to establish a daily writing habit. Habit being: a settled or regular tendency to practise, especially one that is hard to give up. I found daily writing hard, and that I did it best in the mornings. If I left it until later in the day, then there was a risk it wouldn’t happen. That pattern hasn’t changed and I confess I haven’t quite fixed daily writing as a habit. Life (and my brilliant ability at procrastination) sometimes gets in the way. But the best part about this definition is the last bit: hard to give up.
That’s certainly true. If I write nothing for a day, I miss it. Two days and I’m positively edgy; any longer and I feel like I’ll burst if I don’t write something. (Although, irritatingly, the longer I leave it the harder it is to get started again!) I can only return myself to a state nearing physical and mental comfort by writing. NaNoWriMo finally freed me me to write anywhere – on trains, in public places, in front of my family – and allowed me to understand I didn’t need a dedicated space with a special chair and my favourite pen. (That would be still be very nice though, if any of my family are reading this…) I completed NaNoWriMo entirely on my laptop, but have since returned to the pleasure of a smooth-rolling pen, or pencil, and my favourite lined notebooks, for first drafts, at least.
I’d promised myself I wouldn’t re-read my efforts for several months. After all, I’ve never written anything longer than a 5000 word story or 45 minute radio drama in the past. I couldn’t quite leave my NaNo characters alone, however and wrote a few short stories playing around with their lives prior to when my ‘novel’ started. Finally, I printed out my mountain of words and read them in three sessions. Mostly, I cringed at the awful writing and the telling not showing, but I also remembered things I’d forgotten, and loved being back with these people in my mind. I made some notes on the sheets, but realised the need for better structure, always a weakness in my writing.


I read KM Weiland’s unlikely-sounding 5 Secrets of Story Structure – it’s great! I have now worked out a much stronger arc to my novel, and re-ordered some of the events and thought more about themes. It was as if I had to write it first, to see what it was going to be about, and now I know that, I can write it properly. So the rewriting proper will start in the Autumn, and in the meantime I’ll try to fix that daily writing habit good and proper!
Posted by Unknown at 15:11 3 comments: