How to get your short story noticed 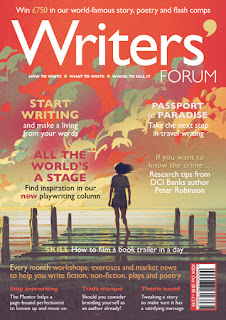 I recently won second place in The 'Writers' Forum' short story competition, which means payment and publication (the two most important things for a writer after the actual slog of imagining and editing a story).

So what is my advice to get your story noticed?


Sometimes it takes a few submissions to get your story placed and that enforced 'drawer time' when the story is out there, is always positive.  I was lucky with this one but others I've had published before, have been rejected and rewritten before acceptance by another publisher.
Good luck!

With just 2 weeks until the official launch of my new book, Lawn House Blues, I recently emailed a writing friend, Kathy who lives in America, to tell her the news. In my email I commented the book had taken two years to write and she replied, ‘Two years really isn’t bad for getting out a novel. I think James Joyce took ten’.
I worried that, having promised myself I wouldn’t, perhaps I had rushed it (because looking back I knew I had hurried my last novel). This set me thinking about the timeline of this book’s creation.

November 2014 – first ideas about the novel; working title The Treehouse.

May 2016 – first chapters saved on to my computer after months of thinking, planning and making notes.

July 2016 – early manuscript sent to professional editor through Writers Workshop (much too early as it happened). One certainly learns by one’s mistakes - she was not impressed.

December 2016 – The real Lawn House Blues began. I removed it from the drawer, took a deep breath and started a major re-write, with a new beginning and a change of point of view.
Wivenhoe Writers (wivenhoewriters.blogspot.co.uk) were a great help at this time and have been ever since. We had fun finding a new name and eventually settled on Lawn House Blues.

May 2017 – I attended a symposium on ‘Finding an Agent’ run by Writers Workshop (now called Jericho Writers at jerichowriters.com) after which my sister and my husband graciously took on the roles of copy-editors and beta readers to help me prepare for the next stage ...
August 2107 - I submitted the manuscript to numerous literary agents in batches of ten. Each individual required research into their requirements, a personalised letter, a synopsis and a different number of words to be sent. This took months.
I also entered three novel competitions, run by Lucy Cavendish College, Retreat West, and Good Housekeeping respectively. The competitions brought no success but it seemed a good exercise at the time. Most of the agents did reply after 8-12 weeks, with a kind ‘no thanks’ rejection letter. A couple were quite positive but said it wasn’t for them and wished me luck. One even forwarded the manuscript to a colleague she thought might like it, but still no plan emerged during a long and frustrating winter.

January 2018 – I was summoned to an afternoon of tea, cake and critique by the Wivenhoe Writers. That afternoon they picked the novel apart, allowing me to rebuild it for the third time, over the following weeks.

April 2018 – I approached Spiffing Covers(spiffingcovers.com.) who agreed to help me self-publish. One of their freelance editors, Kimberley Humphreys performed the final edit and the manuscript was finalised, while Stefan Proudfoot created a beautiful and relevant book cover.

July 2018 - All I had to do was produce the back page bumpf and an ISBN while Spiffing Covers sorted the typesetting, ebook conversion and distribution, ready for the official launch date of 21 September 2018. That's a total of 2 years and 8 months.
Posted by Philippa at 17:06 No comments: