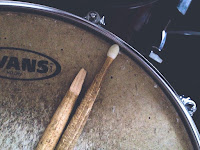 Writing can be a solitary process and even more so in a lockdown. As a writing group, we needed motivation, so in our monthly Zoom meeting we chose a local competition to enter, with just a week until the deadline. The rules of the competition were simple, to use the sentence ‘the drum was lying in a slowly-spreading puddle’ within a story and limit it to 500 words.

It is not the easiest sentence to include without it standing out, but the resulting stories were diverse, from comedy to myth, and all hid the words within the text in creative ways. While none of us won the competition, it was the push we needed to put pen to paper (or fingers on keyboards). Below are paragraphs from each story from the group, which contained the obligatory sentence:
Extract 1
We tug and yank and it crashes onto the tarmac. We watch the drum, lying in a slowly spreading puddle of precious gin which trickles away. As if by magic, several creditors appear, and once I’ve paid them off, there’s nothing but air. No sign of the old bat. Worse still, here’s Daddy, hands on hips, glowering at me.
Extract 2
Robbie thwacks with his drumstick again. The wool strap snaps and the ruptured thing flies from him. The drum lies in a slowly spreading puddle, sinking. Robbie squeals and I feel the tears stinging my eyes. I wait for his howls and want to howl with him too, but instead he looks up at me.
Extract 3
Bin day, two weeks ago and the youths were kicking balls at my rubbish again. Last time I complained at a committee meeting but Linda says they’ve nothing to do, the young people. She’s got three; likes to shove it down my throat. Anyway, I’d had enough and I went after them. Result: I got a load of abuse, lid got chucked into next door and the drum was lying in a slowly-spreading puddle…of ‘bin juice’ Mr Number 3 called it - or Rob - when he came over to help.
Extract 4
A blushing Margot giggled, ‘I could use the twelve drummers.’
‘There’s a problem,’ Chomley chipped in. ‘The Drum Major slipped in the rain last week and fell into a huge pothole in the High Street.
‘Oh no,’ said Margot with exaggerated shock, looking askance at Farmer John.
‘Yes, and it’s your wretched farm carts that cause all the potholes Councillor John,’ Chomley said.
‘Poor man has concussion and his best bass drum was left lying in a slowly-spreading puddle. It was late at night, hours before a good Samaritan came to the rescue and the drum is ruined.’
‘It’s you who never gets the roads repaired,’ Farmer John barked at the clerk. ‘But surely they can manage with eleven drummers.’

Extract 5
The caravan was on its side, the water drum splintered in two, and the awning bleached and torn. It was stripped of possessions: the tapestry rugs her mother had woven their stories into, the thick blankets to protect against the cold nights and the food stores: strips of dried cane rat. All gone.
It must have been bandits who took it, for the drum was lying in a slowly-spreading puddle of milk. Her family would have fought hard to conserve that resource - the difference between life and death.  She looked at the shape of the dunes.
A set of damp footprints led west.
Extract 6
When Jose returned from his game of hopscotch to take a sip of his lemonade, yellow and flecked with tiny pieces of lemon already warm from the afternoon sunshine, he glanced down to make sure his drum was still where he left it. He noticed the drum was lying in a slowly spreading puddle.
‘What happened to my drum?’ Jose said in a sharp voice which made everyone stop talking and stare at his indignant face.
The most important part of the competition was the collaboration involved in the process – the writing together. The exercise produced six stories which were passed between the group for feedback. The competition gave us a sense of purpose and community, and in the end, new creative work to edit and improve. It broke the block.