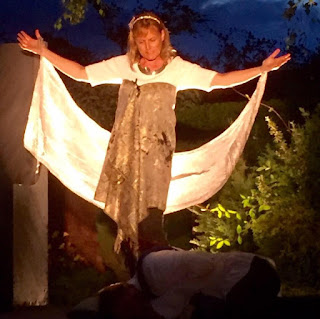 Did your first experience of Shakespeare at school put you off, or were you lucky with an inspirational teacher? I was lucky and loved it, but hadn’t acted in a play since I was at primary school. In an area of my life loosely related to my writing, I’m co-directing Macbeth - my second Shakespeare performance – for the Wivenhoe Open Air Shakespeare Company (WOASC).

When I was a primary-school teacher, I used drama and wrote and staged devised plays and noticed how the whole process improved the children’s writing, understanding and confidence. Wanting to develop my skills, in 2012 I went along to watch The Tempest in rehearsal with Sheila Foster (Director and Founder of WOASC) and stayed. I became prompter for the performance. By the end of the run, I knew the play so well, I devised and wrote a version which the year 6 class performed - followed in subsequent years by A Midsummer Night’s Dream, Beowulf and Treasure Island (I was thrilled that when OFSTED came into the hall to watch my lesson, we were rehearsing the mutineer versus crew fight scene!) and several other small-scale productions. I enthusiastically taught English through drama and was disappointed when the government cut much of it from the National Curriculum, as I’d seen how much it helped, and indeed I sent a tranche of children off to secondary school with a love of Shakespeare. But that’s for a different blog post.

In the meantime, I tentatively had a try at acting for myself and cut my teeth as a comic character called Slender in Merry Wives of Windsor. Making the audience laugh went straight to my head and I was hooked! Maybe I’d been an actor all along, as a teacher. Later parts for WOASC included Lord Essex in King John, Celia in As You Like It, a multitude of small parts in Pericles (including an assassin and also the Goddess Diana) and Saleria in Merchant of Venice. I am in no way a Shakespeare expert, though I’ve learned a huge amount from performing in these plays. If you’re interested – and it’s great fun – look out for our open, informal workshops during the Autumn and Spring, when we’re not rehearsing for our summer performance.

Last year, I was lucky enough to co-direct the complex and intriguing lesser-known play Cymbeline with Sheila, and this year I’m Assistant Director (with Clare Durance directing) for Macbeth. We’re performing in St Mary’s Churchyard, Wivenhoe, and, if you’re local, I strongly urge you to come and watch. For those of you who are confused (and I was, until I became involved) a Director guides the actors performances, while a Producer organises everything in between venue-booking and insurance, printing of posters, tickets and programmes, right through to ensuring there are audience toilet facilities! There is a huge and talented production team to co-ordinate and the crew (staging, lighting, costume design, props, publicity, music) comprises a greater number of people than actors. This year we are Producers as well as Directors (the latter being more fun) working with the cast on interpreting Shakespeare’s lines and telling the story as a whole. We started work last Autumn, auditioned in February, and began rehearsing our superb cast at the end of March.

The WOASC philosophy is to tell the story as clearly as we can, so the audience can follow (even without much knowledge of Shakespearean language). We hope we’ve achieved that, although the language in Macbeth is truly beautiful - some of the best - and it’s been described as a long poem with good reason. There is something very special about whole atmosphere and experience of Outdoor Theatre (fingers crossed for dry evenings, wrap up warm even if it’s a hot day!). Do come, 25-29th June, 7.30pm, tickets £7.50 from the Wivenhoe Bookshop and online here. Next year, I’m Lead Director and I’m already playing around with ideas. Watch this space! 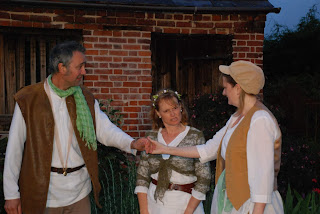