Launch of 'Lament for a Siege Town' by Clare Hawkins 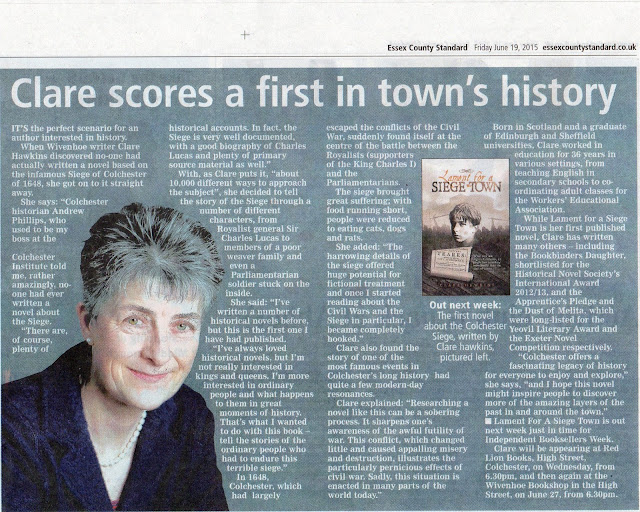 Clare's book is available to purchase at Wivenhoe Bookshop and The Red Lion Bookshop in Colchester.
Posted by Sue at 16:40 No comments:

How to write a Drabble by Sue Dawes.

In July, three of my Drabbles will be published in an on-line e-zine called Specklit (http://specklit.com).  They are taxing, yet fun to write and really hone your editing skills.

So what is a Drabble?
It’s a hundred word story- exactly 100 words in my case. The form is very popular in the Science Fiction genre but the subject can be anything you like.

Where did the term come from?
The term was first coined in Monty Python’s, Big Red Book. ‘Drabble’ was described as a word game in which the first contestant to complete a novel was the winner.  When the game was transferred from the page to the real world, it was decided that 100 words was sufficient in order to play.

What are the rules of a Drabble?
“Rules
'One hundred words' must be EXACTLY one hundred words: not a syllable more, not a letter less.  In addition, up to fifteen words (title, sub-titles and the like) are allowed.  Hyphenated-words-are-argued-about.” David B Wake.

Tips
Even though the story is only 100 words, it needs structure.  Like a Haiku, the best Drabbles have a twist at the end.  The best way to approach writing a Drabble is to write a longer story, with the usual beginning, middle and end and pare it down (with a cleaver rather than a filleting knife).  And finally, invest in (or bookmark) a thesaurus.  It will help you to reduce your word count and yet allow you to say so much more.

The Summer edition of WDTL has been produced and can be found (in hard copy) at Wivenhoe station.  It is also available to read on-line at http://offtherailswivenhoe.blogspot.co.uk/
Posted by Sue at 19:47 No comments: